No short-form video platform has quite figured out how to share ad revenue yet, making it difficult for creators on apps like TikTok to make a living from their content alone. But today, YouTube announced major changes to its YouTube Partner Program, allowing creators to earn ad revenue on Shorts, its TikTok competitor.

Now, Shorts creators can qualify for the Partner Program, which allows creators to earn ad revenue from YouTube. The existing Partner Program for long-form video requires YouTubers to have 1,000 subscribers and 4,000 watch hours. This won’t change. But starting in early 2023, creators will be able to apply to the program if they meet a new Shorts-specific threshold of 1,000 subscribers and 10 million Shorts views over 90 days. As members of the Partner Program, these creators will earn 45% of ad revenue from their videos.

“I’m proud to say this is the first time real revenue sharing is being offered for short-form video on any platform at scale,” said YouTube Chief Product Officer Neal Mohan. He’s right. TikTok has started experimenting with ad revenue sharing, but its efforts seem to focus more on the advertiser than the creator, as only the top 4% of all videos on TikTok can be monetized through its TikTok Pulse program. For the most part, creators have found it increasingly difficult to make money from TikTok’s Creator Fund. 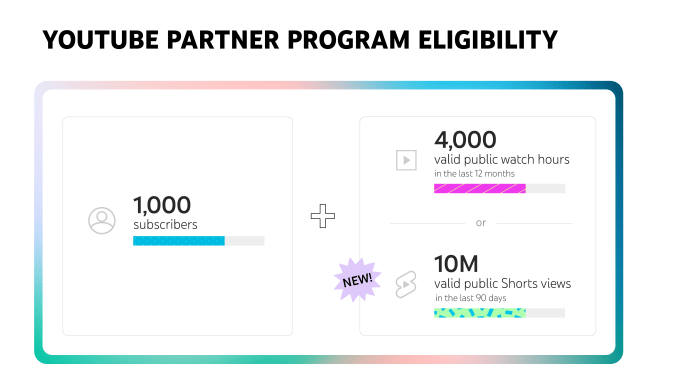 Today’s news was leaked in a report from the New York Times last week, but now that it’s confirmed, YouTube Shorts is poised to become TikTok’s biggest competitor. If creators can make more money on Shorts than on TikTok, then they’re incentivized to make original content for the YouTube platform.

“For me, the key benefit of Shorts is that it helps me reach loads of people and pull people into my community. But my long-form content brings in a lot more revenue. So there’s been sort of a trade off,” said YouTuber Kris Collins (KallMeKris). “That’s why this news about the Partner Program coming to Shorts is so huge. I’ll be able to make a living from both formats.”

YouTube also shared that this update to the Partner Program will enable the platform to license more music for use in Shorts, which could help encourage creators to use Shorts more often. Creators in the program will be compensated the same, regardless of whether they use licensed music.

TikTok and other short-form video apps haven’t unveiled a similar revenue-sharing program yet because it’s trickier to figure out how to fairly split ad revenue on an algorithmically generated feed of short videos. You can’t embed an ad in the middle of a video — imagine watching a 30-second video with an eight-second ad in the middle — but if you place ads between two videos, who would get the revenue share? The creator whose video appeared directly before or after it? Or, would a creator whose video you watched earlier in the feed deserve a cut too, because their content encouraged you to keep scrolling?

“Ads for Shorts are different than long form. They’re not attached to specific videos, but run in between videos. So every month, revenue from all those Shorts ads will be pooled together,” said Mohan at the Made on YouTube event. “That money will go to paying Shorts creators as well as covering the costs of music licensing from the share of money allocated to the creator.”

YouTube wrote in a press release that money will be distributed to creators based on their share of total Shorts views.

“Let me be very clear, nothing is changing in terms of the importance of long form,” said Tara Walpert Levy, a YouTube VP working on content partnerships. “We are equally committed to all of the formats that help creators express themselves.”

YouTube also unveiled Creator Music, now in beta testing. Creators can browse a large catalog of songs to purchase for use in their content, with the terms of the music rights spelled out in simple terms. They’ll also be able to opt for tracks with new revenue-sharing option where both creators and music rights holders earn money from their content.

Editor’s Note, 9/23/22, 12:30 PM ET: Updated to further clarify the differences between the YPP program for long-form and short-form, including adding that Shorts-specific rules also include a subscribers threshold, not just a views threshold.