PayPal-owned Venmo is today rolling out two changes to its peer-to-peer payments app, including the ability to donate to charities through Venmo as well as a redesigned money-sending experience. The latter aims to make it easier to see how much you’re sending and who you’re sending to, while also improving the ability to either pay or request multiple payments at once.

The updates will begin to become available to all Venmo users today across both iOS and Android, the company says, though the donations feature will expand to include new capabilities over time.

Initially, Venmo users will be able to browse through verified charities in their local community or browse by charity categories, including things like animals and pets, disaster relief or education, for example. Users can choose to make a donation to their charity of choice using their Venmo balance, debit or credit card, or a linked bank account. In the weeks ahead, Venmo users will also be able to share a donation they made with their friends to encourage others to give, too, the company notes.

Venmo parent company PayPal has offered a similar charitable giving feature in its own app since 2016, which connects its users to the tens of thousands of certified charities available through the PayPal Giving Fund. The fund collects donations on behalf of users, provides receipts to donors, then distributes the funds directly to the charities’ PayPal accounts. Venmo, meanwhile, has been focused on peer-to-peer payments and, in more recent years, enabling users to pay businesses and other small sellers.

However, in October, PayPal announced that charities would be able to create a profile on Venmo to reach beyond the PayPal community to also tap into Venmo’s user base of some 90 million customers through an upcoming in-app feature. At the time, the company noted that 61% of donors are most likely to hear about causes through word-of-mouth with friends and family, which is why the more social Venmo app would make sense.

To use the newly added feature, Venmo users can tap on the search bar at the top of the app and select the new option, “Make a donation.” They can then browse the “Find a Charity” page where they can select a PayPal-confirmed charity and learn more about the cause. If ready to donate, they’ll tap the “Donate” button, enter an amount and a note. Later, they’ll be able to share the donation to inspire friends.

Transaction fees are currently set at 1.9% + $0.10 for the charity profiles on Venmo and don’t include other setup or monthly charges. 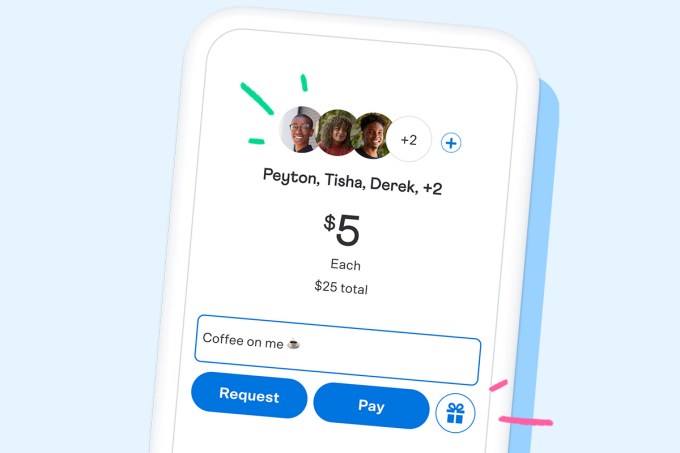 The other change coming to Venmo is not necessarily a new feature, but rather involves a user interface redesign. Now, Venmo users will be shown a new “send money” experience with added profile pictures and a larger font size for the dollar amount. Before, users could see the profile picture if they were on a friend’s page, but the actual “Pay or Request” screen would only include their name and a small box to enter the amount.

In addition, Venmo says customers will be able to tap on the plus “+” button next to the first recipient’s profile picture to scroll through a list and add more recipients to the same transaction. Here, Venmo will display the total amount being sent as well as the amount for each transaction. This provides a simple way to quickly send money to a group of people which could be a handy way to gift friends or family some cash during the holiday season.