Consumers reduced their mobile app spending in the third quarter of 2022 by roughly 5%, but the social video app TikTok just delivered another record-breaking quarter on this front. For the fourth straight quarter in a row, TikTok continued its streak as the app that has generated the most revenue in a quarter.

These new findings, in a report published today by Sensor Tower, see TikTok again becoming the highest-grossing app in the world even as the overall market is seeing a slight decline. However, the report does combine TikTok revenue with its Chinese version, known as Douyin — so it’s technically the revenue generated by the two apps offering the same feature set of short-form, vertical videos — not one.

TikTok’s global app along with Douyin on iOS together retained the position as the top-grossing non-game app across the App Store and Google Play combined, with approximately $914.4 million in consumer spending in the quarter.

Reached for comment, Sensor Tower explained that Douyin alone had generated approximately $433.5 million in consumer spending, or about 47% of that total.

On the App Store, TikTok was the No. 1 top-grossing non-game app, while it was No. 2 on Google Play, behind Google’s own storage subscription service, Google One, which had generated just over $330 million in the quarter.

To date, TikTok and Douyin’s apps have generated around $6.3 billion in total revenue, the report notes.

Across the broader app market, the trends weren’t quite as positive.

Consumer spending across in-app purchases, subscriptions and paid app downloads on both the App Store and Google Play dropped by 4.8% year over year to $31.6 billion in Q3, while app downloads fell a slight 1% to 35.3 billion. 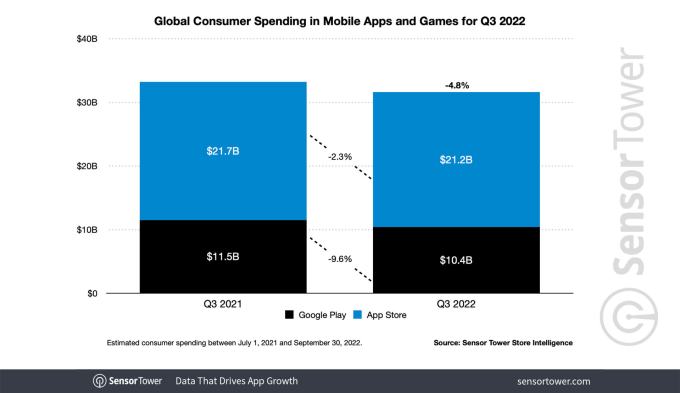 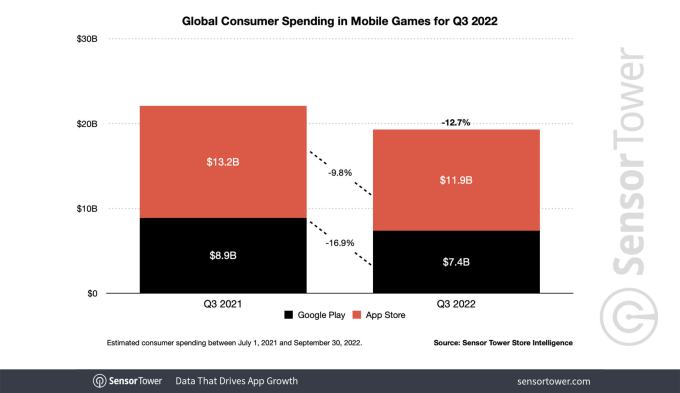 Meanwhile, app installs dropped only slightly. But as Google Play is responsible for driving downloads, the nearly 1% decline in terms of app installs was largely due to its 2.2% drop to 27 billion downloads in the quarter. The App Store had actually seen app installs grow by 3.8% to 8.2 billion, but this couldn’t cancel out Google Play’s larger decline. 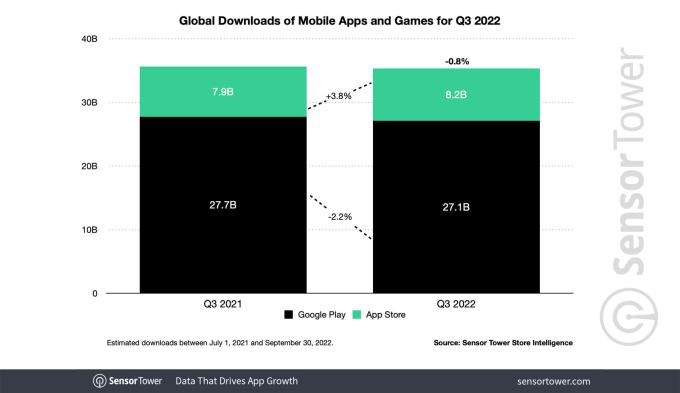 TikTok was again the most downloaded non-game app with 196.5 million installs across both app stores combined and on iOS. But when Google Play is examined alone, Facebook moved into the No. 1 spot with 150.3 million installs, replacing Instagram.