Instagram is currently a mess and users — including Kim Kardashian — are unhappy about it. The company is trying to cram too many features like Reels, Remixes, an algorithmic feed and NFTs into the app. Developers Ansh Nanda and Hardik Patil got so frustrated that they decided to make an app called The OG App to give users an ad-free and suggestion-free Instagram feed. [Update: The app has been pulled from the App Store. Apple said it accessed Instagram’s services in an unauthorized way. Separately, Meta said the app breached its rules.]

The OG App — available on iOS and Android — is not trying to create a new social network. Instead, it is just realigning the Instagram feed to users’ choice. Users can log in to their Instagram account and it shows the home feed right away. But the app removes ads and suggested posts from their home feeds.

Plus, it lets users create alternative feeds and share them with friends. Think of them as Twitter lists, but for Instagram. For example, you can create different feeds for food, cocktails, tennis, movie celebrities and photographers without following all those accounts. Users can choose a default feed on launch. This way, users can give priority to another list over their own home feed. This is useful when a user’s interest-related feed will have more engaging content than the default feed.

The app also has an option that stops the feed from fetching new content for 24 hours. This option works like a digital well-being feature to stop users from continuously checking Instagram. They can still check posts that have already been fetched in all feeds along with saved posts. 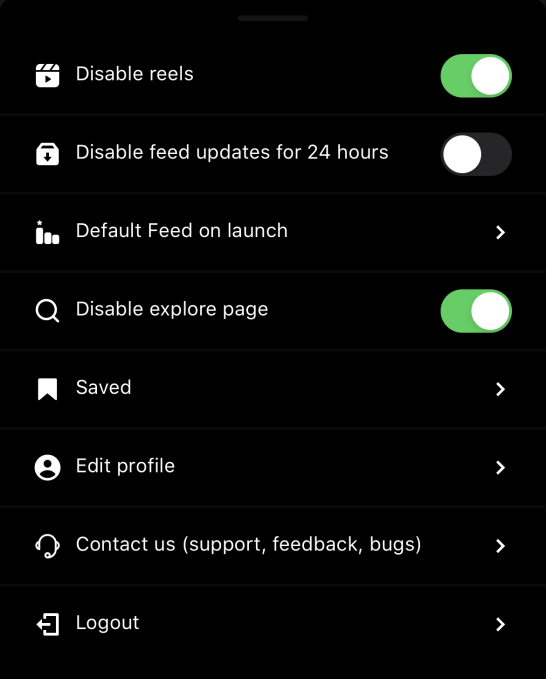 Nanda and Patil incorporated Un1feed, the company that’s publishing the OG App, last June and began working on social apps to provide a cleaner experience. They picked Instagram first as they think it has the most convoluted feed filled with ads. The pair met while working at KiranaKart, a grocery delivery app that’s now known as Zepto and raised $200 million at a $900 million valuation in May.

Nanda and Patil said they wanted to give back more control of their feeds to users with this company.

“We saw our friends and family getting affected by social media, and even deleting apps because they didn’t have enough options to modify what they see. We wanted to put users, and not the advertisers, first with this app. We started with Instagram because we thought the app has the most toxic relationship with its users,” the founders said on a call with TechCrunch.

Nanda said the company talked to hundreds of users and found that Instagram users were unhappy with the default social network experience. The company has faced a lot of criticism for giving priority to algorithmically suggested content over posts by friends and family. In July, the social network had to walk back changes it made with the algorithmic feed.

Un1feed has received $1 million in pre-seed funding led by Ali Partovi from Neo and with participation from Tribe Capital, Great Oaks VC, Global Asset Capital, Pareto20 and Cory Levy. The co-founders told TechCrunch the company is currently not looking to charge its users or find other monetization opportunities. The startup has eight people working on the app, including Nanda and Patil.

In the coming weeks, developers want to introduce features such as custom feeds with private accounts, sharing custom feeds with friends and downloading stories for offline consumption. Plus, they will soon allow users to sort any feed using filters like “recent,” “hot” and “top in week/month/all.” The app makers are also planning for long-term features like sharing collections as feeds and making collaborative feeds.

While social media companies have tried to provide more control over their feeds to users, they often have to resort to third-party apps to get the best social network experience. For Instance, there are clients like Apollo, Joey and Boost for Reddit and Tweetbot and Talon for Twitter. The OG App wants to provide a similar modifiable experience to Instagram users.

All these clients have to rely on APIs provided by the core social network. Twitter notoriously crippled third-party clients by restricting its API in the last decade. But the founders of The OG App said they’re not worried about any changes to the Instagram API at the moment and are concentrating on building a solid product for the users.

After the app was released, many early users questioned the app’s privacy practices including data collection listed on the App Store and a login method that locked some users out of their accounts or showed them a prompt for login from a different location.

The app makers said that they had to use similar permissions to Instagram to use the API and get data from the social network. Regarding the login method, the firm said it reverse-engineered Instagram’s Android API to make the app work, and that’s why users are seeing login prompts from another location. However, the startup specified that it’s not storing any data on its servers.

We definitely need to make this more clear!

Un1Feed also noted that in the coming days it will roll out a new log-in method for users that will resolve a lot of these issues and will provide more clarity over how it uses the Instagram API.

App researcher Alessandro Paluzzi pointed out that the OG app might be using Instagram’s private API, which could face some scrutiny from Instagram. We have reached out to Meta for a comment and we will update the story if we hear back.

Days after its launch, Apple pulled the app from its App Store. In a Twitter thread, The OG App lays the blame for the removal on Facebook (Meta). But this suggests that the app was somehow in violation of Meta guidelines or policy in some way, as the thread explains how the app successfully cleared Apple’s own App Review.

Yesterday night, after we received 10,000 downloads,
were #50 on the App Store, and had an average rating
of 4.1 stars, Apple took us off the App Store.

Users chose OG over Instagram because we listened to
them and built what they wanted.

We’ll update as we learn more.

The story has been updated on 9/28/22, 3:30 AM ET with security and privacy concerns flagged by users and the company’s responses to them. It was updated again on 9/28/22, 4:28 PM ET to note the app had been pulled from the App Store.