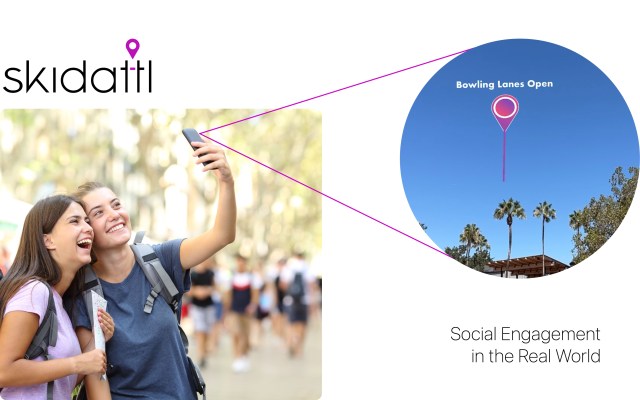 Skidattl wants to use augmented reality to get people to engage with the real world. It’s a story we’ve heard before from AR companies, particularly as they pit themselves against the potentially isolating effects of virtual reality. But rather than chasing metaversal Pokémon creatures on the street, Skidattl aims to use AR “beacons” to show people what’s going on around them.

Randy Marsden, Skidattl co-founder, said they will be like “a Bat-Signal for fun” once the app launches.

Anyone can make a beacon and anyone can see them. Businesses might set up beacons, which have a one-hour life span, to advertise two-for-one coffee sales, movie times or open bowling lanes. People might shoot up a beacon at a music festival to help their friends find them in the crowd. All a user would have to do is scan the horizon with their phone, or eventually with AR glasses, to see an array of beacons at up to 100 yards of distance, said Marsden.

When Skidattl exhibited as part of the Battlefield 200 at TC Disrupt last week, the company had an AR beacon over its booth to demonstrate what it might look like.

“Of course, you can look at a map and say, ‘What’s near me?’ but this pulls you back into the real world,” Marsden told TechCrunch, noting that he is an Apple alum and a two-time TechCrunch Battlefield finalist for previous companies — Swype (technically TC50) and Dryft (Disrupt SF 2013).

Skidattl’s AR beacons will be anchored by GPS coordinates in the real world. To locate where a user is in relation to that beacon, Skidattl uses Apple’s AR Geo API, which relies on Street View data. Eventually, Skidattl hopes to also incorporate Google’s ARCore Geospatial API.

“When you launch the app, it’ll tell you to scan the buildings across the street, and within a few seconds, it will know where you are,” said Marsden. “And then those beacons are anchored; they don’t move around.”

When people want to set up beacons indoors, Skidattl will also use Wi-Fi signals to help position users against the location of those beacons.

Skidattl is still in its angel funding stage and alpha tech stage, but the startup hopes to go to market with a freemium business model — meaning it will be free to use but Skidattl can monetize through premium subscriptions, in-app purchases and affiliate commissions.

Like any new social media app, Skidattl will have to battle the chicken-and-egg problem — no one will want to use it if there’s not plenty of beacons already lit up, but there can’t be any lit-up beacons without people on the app.

“I think we can kickstart the business side pretty easily by giving them a free beacon,” said Marsden. “On the customer side, getting YouTube and TikTok influencers to talk about it, place ads with TechCrunch and that sort of thing. And then once we have someone in the app, we can give them incentives for sharing with their contacts.” (It goes without saying, but TechCrunch ad sales are totally separate from editorial.)

Skidattl is currently trying to raise $500,000 to finish the minimum viable product and get the money it needs to officially launch its app at South by Southwest in March, Marsden said.

Correction: Skidattl uses Apple’s AR Geo product currently and intends to use Google’s similar product in the future to help geolocate users in relation to beacons.