Global app spending reached $65 billion in the first half of 2022, up only slightly from the $64.4 billion during the same period in 2021, as hypergrowth fueled by the pandemic has slowed down. But overall, the app economy is continuing to grow, having produced a record number of downloads and consumer spending across both the iOS and Google Play stores combined in 2021, according to the latest year-end reports. Global spending across iOS and Google Play last year was $133 billion, and consumers downloaded 143.6 billion apps. 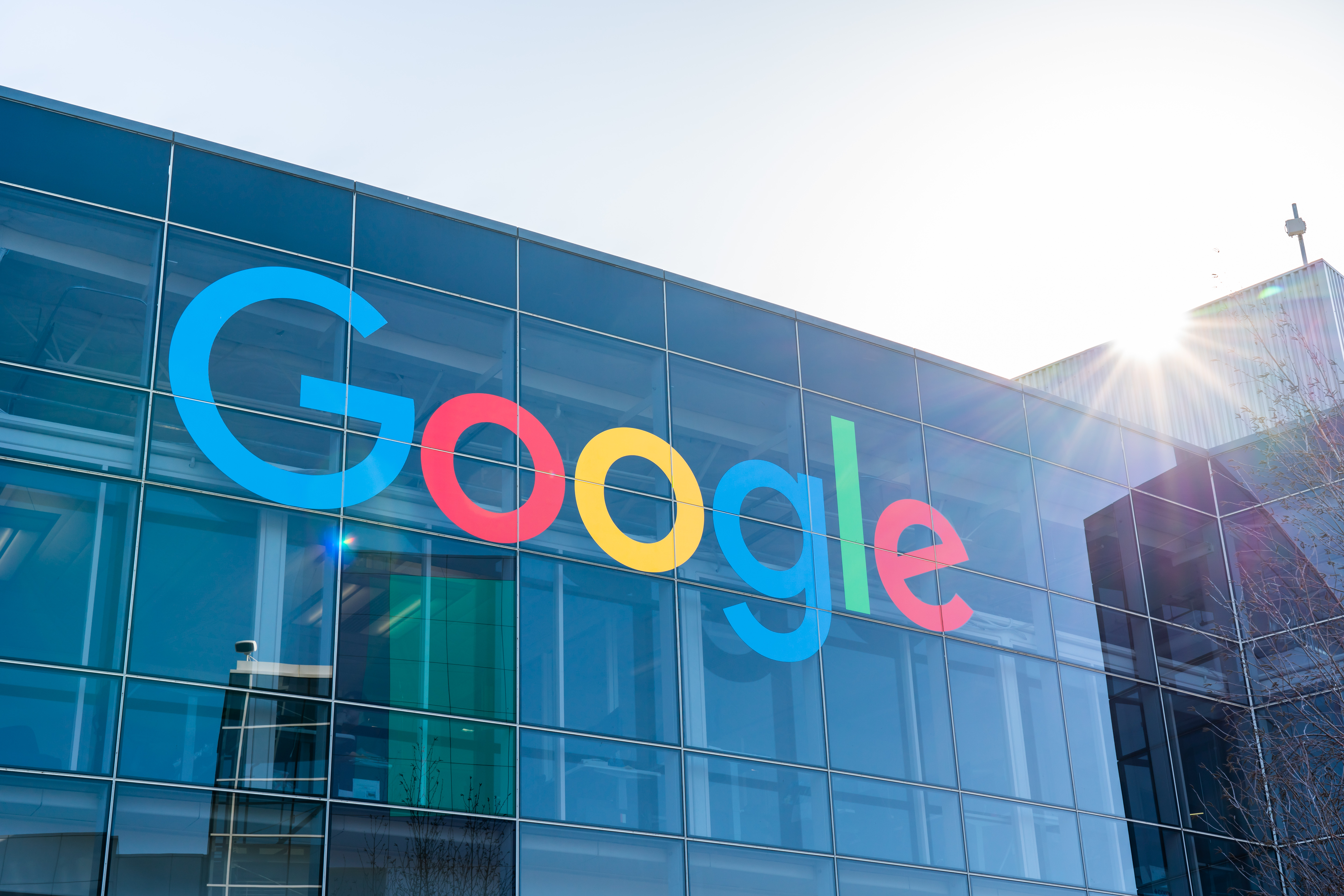 Epic Games and Match Group are looking to fortify their antitrust lawsuits against Google by adding new counts to their initial complaint, filed last year, which illustrate the lengths Google supposedly went to in order to dominate the Android app market. The companies, a week ago, filed a motion to amend their complaints in their cases against Google, which now allege that Google paid off business rivals not to start other app stores that would put them in competition with Google Play. This would be a direct violation of U.S. antitrust law known as the Sherman Act, the amended complaint states.

Epic Games and Match Group had originally detailed Google’s plans in a filing last year, where they detailed a Google program known as “Project Hug,” or later, the “Apps and Games Velocity Program.” This effort was focused on paying game developers hundreds of millions of dollars in incentives to keep their games on the Google Play Store, it had said.

Now, Epic Games and Match Group are looking to add to their complaint with two new allegations specifying how Google had either paid or otherwise induced its potential competitors to agree to not distribute apps on Android in competition with the Play Store, including through their own competing app stores. Google, it reads, had identified developers who were “most at risk … of attrition from Play” and then approached them with an offer of an agreement.

The complaint now deems this a “per se” violation of Section 1 of the Sherman Act, which prohibits “every contract, combination in the form of trust or otherwise, or conspiracy, in restraint of trade or commerce among the several States, or with foreign nations,” it says. (You can read the full story here on TechCrunch.) 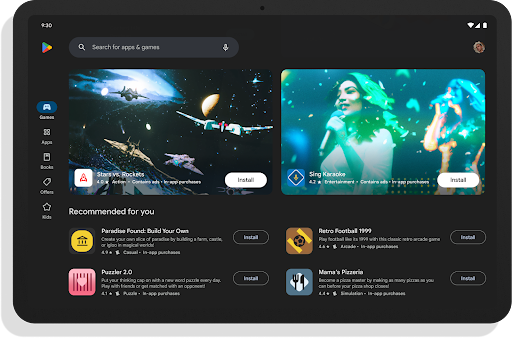 Google announced this week new features for its Play Store that are designed to put more of developers’ store listing assets “front and center.” The company says that on large-screened devices, like tablets, foldables and Chromebooks, the Play Store redesign will make better use of app screenshots, videos and descriptions directly in the Apps and Games Home. This will help Android users when they’re browsing for new apps and games to install, Google says.

It’s also adding the ability for developers to upload Chromebook-specific screenshots in the Play Console, to better portray the Chromebook experience. Developers can upload up to eight screenshots, in the recommended 16:9 screenshots for landscape, with dimensions of 1080-7690px. Google is updating its quality guidelines for tablets for consistency across large screens, as well, but notes that previous uploads won’t be impacted by the changes.

Google additionally published a set of content quality guidelines to help developers learn best practices about how to showcase apps on large screens.

The changes announced this week follow an earlier revamp of the Play Store that offered users the ability to filter search results by device, making it easier for them to discover and download apps for non-phone devices like smartwatches, TVs and cars, including through remote installs. The feature was timely, given Google’s recent debut of its first Pixel-branded smartwatch this month.

Gen Z social media app BeReal encourages its users to take a photo every day — a format designed to create a daily habit. But only a small number of the app’s users are currently doing so, new estimates from a third-party app intelligence firm indicate. According to research from Sensor Tower, BeReal is demonstrating significant traction across some metrics — it topped 53 million worldwide installs across the App Store and Google Play and has seen its monthly active users jump by 2,254% since January 2022, for example. But only 9% of its active Android installs are opening the app every day as of the third quarter of this year, the firm found. 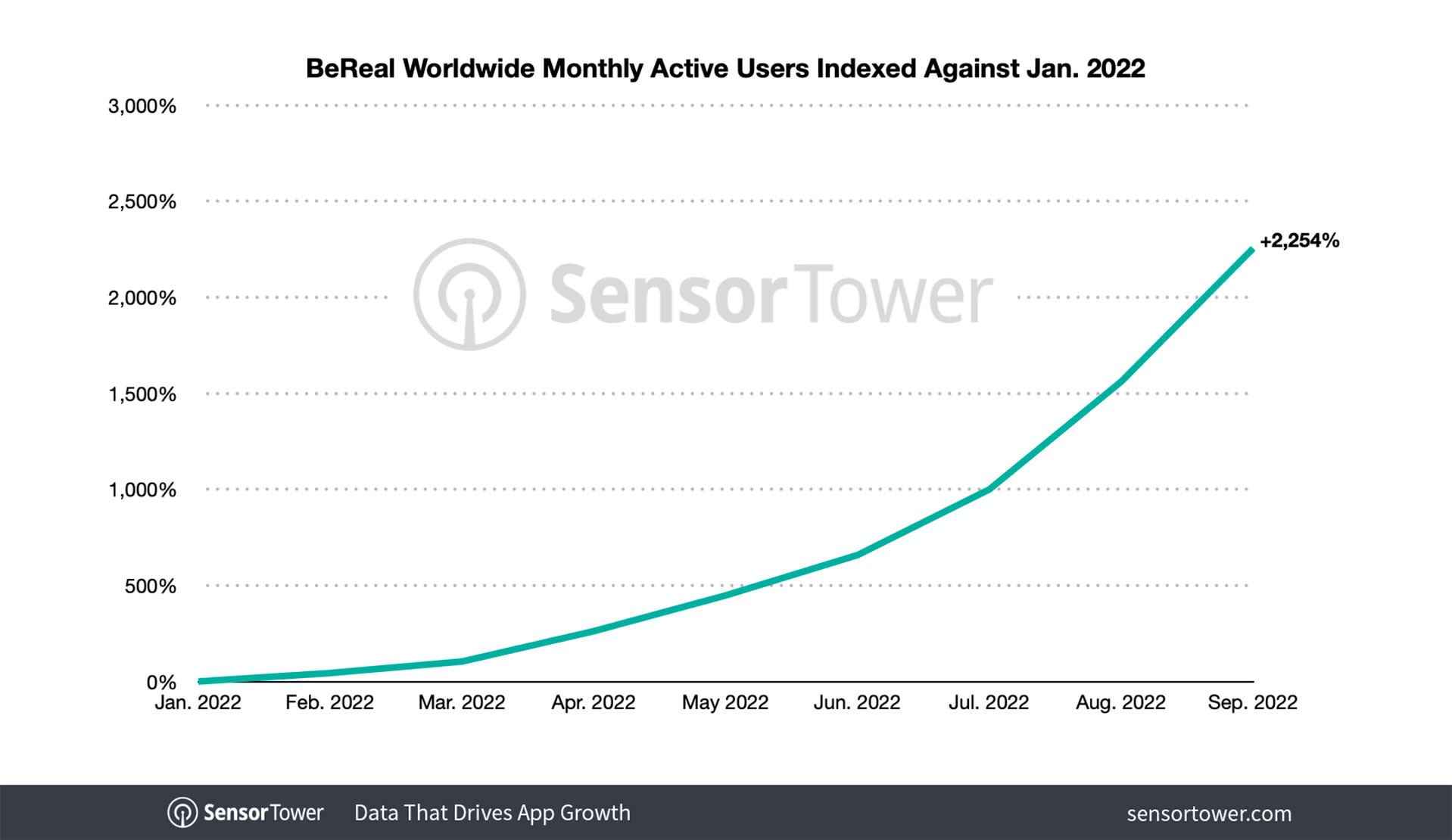 Active users are a better indication of an app’s adoption than downloads, as many people will install an app out of curiosity to check it out, but then abandon the app if they don’t end up enjoying the experience.

On this front, BeReal is still trailing established social media giants, Sensor Tower says. Today, 9% of BeReal’s active installs on Android (users who downloaded the app and are actively using it) are now launching the app daily. That’s far behind Instagram and TikTok. Instagram leads this category with 39% of its active installs opening the app every day, while TikTok comes in second with 29%. This is followed by Facebook, Snapchat, YouTube and Twitter at 27%, 26%, 20% and 18%, respectively. 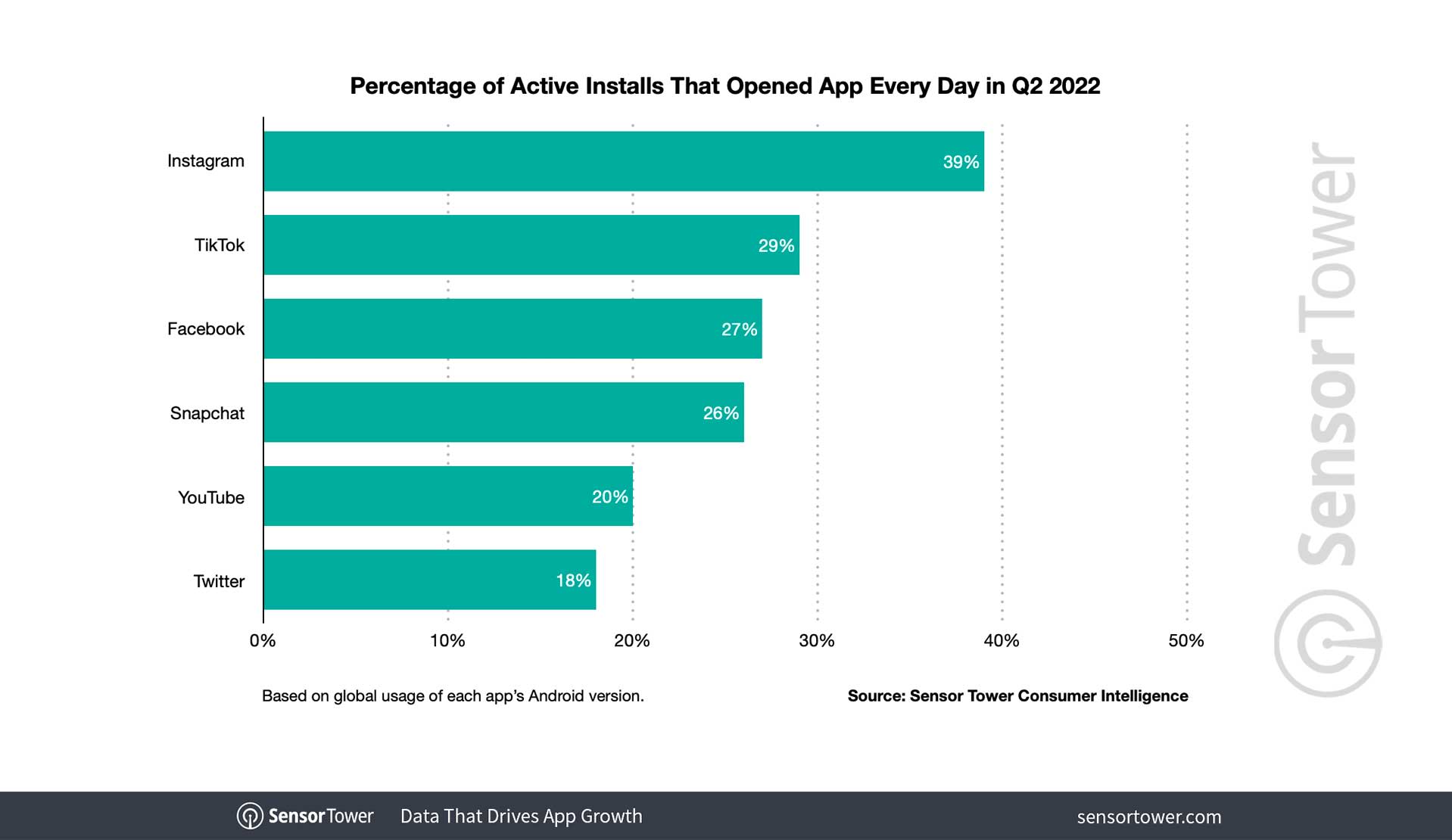 Of course, BeReal proponents point out that the app’s Android adoption is not at the same pace as iOS, as we said in our initial report. With many of its new installs being from young people in the U.S. — where iOS is preferred — this figure may not present a full picture of the app’s current usage. However, it’s a window into a company that’s media-averse, declining to speak to press on the record or share any of its metrics or growth, or even tout its funding. So for now, third-party data is what we have — and, if Android usage can be extrapolated to iOS, it shows that many of BeReal’s users aren’t necessarily everyday addicts. (Yet?)

Elsewhere, another mobile app data firm, 42matters, estimated BeReal’s MAUs on Android were only up by 633% this year, growing from 43,899 MAUs in January to 321,787 MAUs by August 2022. (You can read the full report here on TechCrunch.) 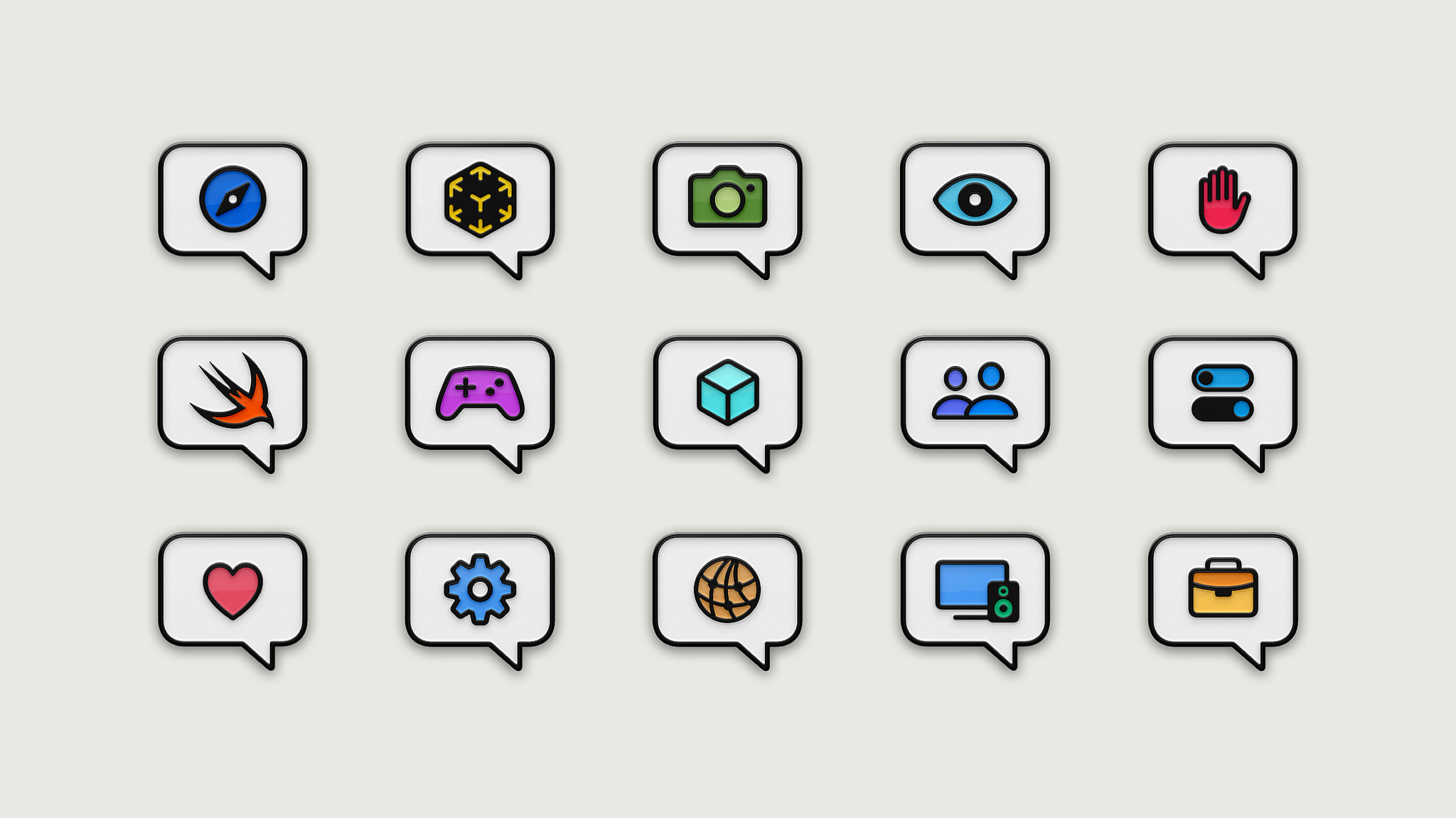 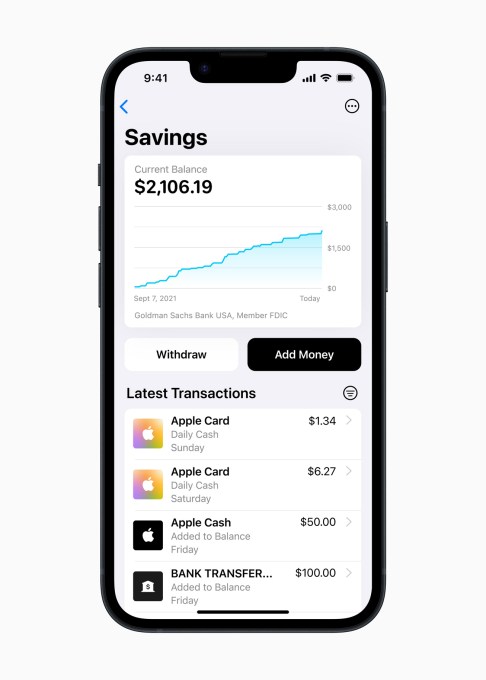 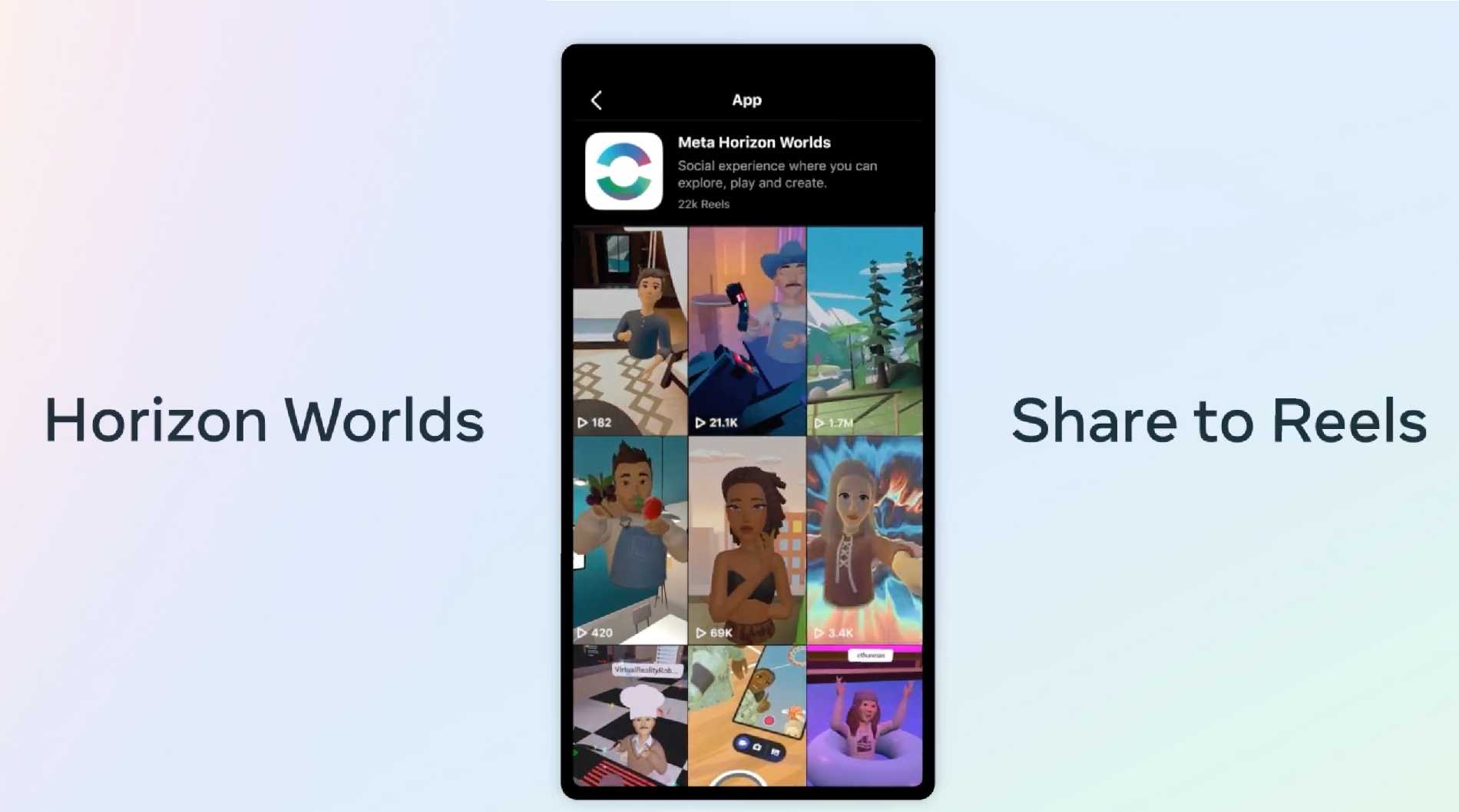 💰Teen banking app Step borrowed $300 million in debt financing led by Triplepoint Capital and Evolve Bank & Trust. To date, the company has raised $500 million in equity and debt. Last year, Step raised a Series C equity round from investors including Coatue, Stripe and angels such as Charli D’Amelio and Jared Leto. The app will also now expand into crypto.

💰Paris-based Homa, which offers an SDK to indie mobile game studios, raised $100 million in Series B funding, led by Quadrille Capital and Headline. The SDK offers tools for tracking metrics in order to improve session and retention times, along with other A/B testing tools.

💰Cairo-based fintech app Telda raised $20 million in seed funding led by Sequoia Capital and Global Founders Capital, with Block also participating. The app offers money management, payments and offers a Mastercard-powered card. The company has onboarded 25,000 users and has a waitlist of 110,000.

💰London-based GoHenry, a digital banking app aimed at kids, raised £49 million+ ($55 million) in Series B funding. The company said 2021 revenue grew 55% year-over-year to £30.5 million, with losses up 20x year-over-year. The startup claims to have 2 million users.

🤝 Lego parent company Kirkbi is acquiring the U.S. edtech company Brainpop, which makes short educational videos for kids, for $875 million. Brainpop’s videos, available online and through its apps, reached around 25 million children per year across two-thirds of U.S. school districts. 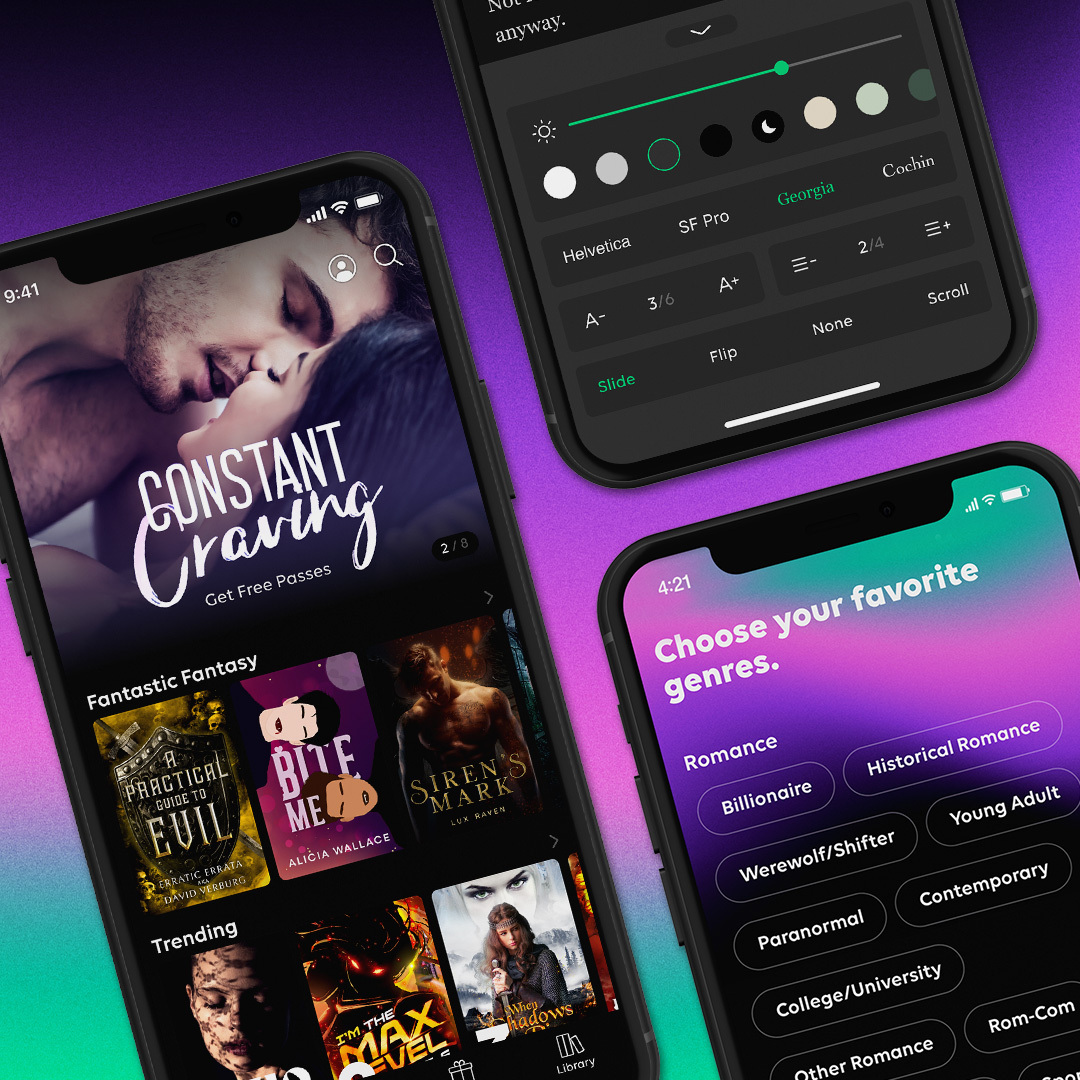 Naver, the parent company behind Webtoon and Wattpad reading apps reaching a combined 200 million monthly users, has launched a new app called Yonder, a serialized fiction platform. The app aims to attract both those who are already avid consumers of serialized fiction as well as those new to the space but looking for a more premium experience without ads or distractions.

At launch, Yonder will include hundreds of titles and exclusives from authors like romance author Ivy Smoak (The Hunted Series), bestsellers P.C. Cast and Kristin Cast (House of Night) and fantasy author Ruby Dixon, along with titles from publishers including Blackstone Publishing, Aetheon, Sterling and Stone, Portal Books and Wraithmarked. Unlike Naver’s Wattpad and Webtoon app, where anyone can contribute, Yonder’s stories are curated.

To monetize, the app will offer users the ability to explore and read several chapters for free, then unlock the rest of the story using virtual coins purchased in-app. The app will be available on Android and soon, iOS.