Africa is the world’s third fastest-growing crypto market, with crypto adoption increasing by more than 1,200% over the last two years. Countries such as Nigeria, Kenya and South Africa are majorly responsible for skyrocketing adoption rates as citizens try to hedge against currency devaluation and build wealth.

Despite African governments’ inconsistent stance on cryptocurrencies, these countries house most of the continent’s crypto and blockchain startups. In the latest development, one such company, Bitmama, has raised a pre-seed extension of $1.65 million, adding to the $350,000 it received last October, thus, closing the round at $2 million.

Chief executive officer Ruth Iselema founded the Africa-focused blockchain payments startup in 2019. Adam Umar is the company’s CTO, while Akinbola Asalu is the COO. According to the executives, Bitmama started as a WhatsApp group where members learned about crypto, particularly bitcoin, and made transactions. Subsequently, they built a crypto exchange platform and allowed these users to access virtual assets formally and explore other use cases, including buying, selling and swapping crypto and peer-to-peer transactions. More recently, the company introduced Changera, a social payment solution allowing customers to use stablecoins to facilitate remittances and international payments on Netflix and Amazon via virtual cards.

“We started Bitmama to make it easy for anyone across the African continent to buy and sell cryptocurrency. But as time passed, we saw a couple of use cases we could employ this technology to solve,” CEO Iselema told TechCrunch on a call. “Many people wanted to make transactions asides from buying and selling of crypto, so we built stuff that could also let them buy local and international airtime and data. Then, due to local bank card limitations of $20 monthly spend, we provided virtual dollar cards for Nigerians to make international purchases.” 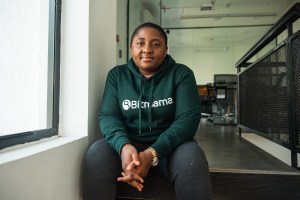 The company says its Changera virtual crypto debit cards, funded with stablecoins, have over $10,000 in monthly spending limits and “can work anywhere in the world for online transactions.” According to the CEO, Bitmama launched Changera at the intersection of blockchain payments and lifestyle, mainly targeting non-crypto-savvy people who are more comfortable using platforms with basic UI interfaces and less crypto jargon to communicate.

Earlier this year, Bitmama had fewer than 20,000 users across both platforms. That number has grown to more than 70,000, noted Iselema, adding that both products, Bitmama exchange and Changera, have seen massive uptake with minimal marketing. Revenues come from margins on the transactions its users perform on the platform.

African blockchain startups raised $91 million in the first quarter of 2022 alone compared to $127 million they received from investors throughout 2021. While new upstarts in the web3 space such as MARA, Nestcoin and Jambo have grabbed the headlines with new but unproven business models, collectively, exchanges and remittance platforms remain the most backed in the space, for example, Afriex, Yellow Card and VALR. Other notable names include YC-backed Buycoins, Quidax and Busha.

Though Bitmama isn’t among the continent’s most funded blockchain platforms, Iselema boldly claims it is one of the most innovative blockchain companies around — and the new investment will allow it to be more tenacious on that front.

“One thing which is the backbone of Bitmama is that we are very innovative. Since we came into the ecosystem, we’ve been doing many things where we’ve been the first,” she said. “For instance, we were the first to launch QR codes for offline onboarding. Even when we launched the crypto cards, we were the first to do that. And we have a couple of innovative products we’re bringing out that will be the first in the market, and we want to keep that momentum.”

Currently, Bitmama is working on a B2B play where via APIs, it can assist businesses in various industries that want to offer crypto-based services to their users without building from scratch. The executives say Bitmama is testing this feature with some clients in beta.

The blockchain company will use the pre-seed to expand its operational presence, strengthen its team, consolidate its product offerings and plot market penetration across Africa while rapidly scaling new use cases for cryptocurrency within the continent, it said in a statement.

Managing general partner at pan-African fund Launch Africa said he sees his firm’s partnership with Bitmama as a way to allow Africans to trade and manage cryptocurrencies and digital assets conveniently and universally. “This is something that we specifically value in our fund and what Bitmama in particular delivers.”