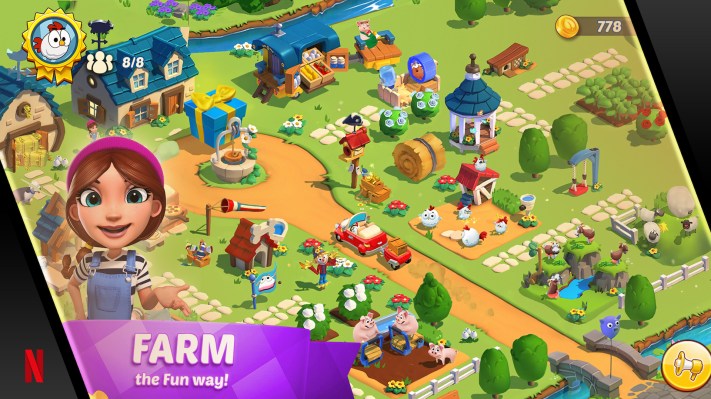 Netflix released nine more mobile games this month, the company announced on Tuesday. The addition of games brings Netflix’s total to over 40 titles, keeping the streamer on track to have more than 50 titles in its mobile games catalog by the end of 2022.

Gameloft released Country Friends in 2015 when FarmVille and Hay Day were at their peak. Country Friends offers the same experience as the other farm management games, but it’s likely Netflix hopes that players will want to check out the game for yet another way to fulfill their farmer fantasies.

The streaming giant tends to rely on well-known games and IP to beef up its library. For instance, Netflix released the Hello Kitty Happiness Parade yesterday, November 29, which feels like a slower version of Subway Surfers and Temple Run. Featuring adorable characters from the Sanrio universe, such as Hello Kitty, My Melody and Pompompurin, Hello Kitty Happiness Parade lets players join Hello Kitty’s friends in a festive parade where they can show off their dance moves. Players must avoid traps set by Kuromi and Nyanmi to keep the party going.

Only Netflix subscribers can play its mobile games. However, there are no extra fees, ads or in-app purchases. The games are available on iOS and Android devices and can be found within the Netflix mobile app. Once you click on a game, you will be redirected to the app store to download the game separately. You must have your Netflix login information to play.

As we’ve previously learned, a reported average of 1.7 million users play Netflix games daily, which is less than 1% of its streaming subscriber base. Despite this, Netflix continues to invest in gaming. Last month at TechCrunch Disrupt, Netflix VP of Gaming Mike Verdu revealed that Netflix was opening a new studio in Southern California and is venturing into cloud gaming.

Also, earlier this month, Netflix added Triviaverse to its interactive series lineup. Players must answer questions as quickly as they can using the TV remote before time is up.