If you often find yourself making Spotify playlists to get hyped for an upcoming music festival or to relive a favorite past show, a new mobile app called LineupSupply can now help make that process easier. This clever utility allows you to upload a photo of a music festival’s poster to have it automatically transformed into a Spotify playlist in a matter of moments. Alternately, you can use the app to find playlists created by others or, with a one-time purchase of $1.99, tap into music recommendations based on the artists in the images you uploaded.

Bauman says he came up with the idea after searching for a Spotify playlist of the lineup at an upcoming music festival, Portola, which he plans to attend.

“This got me thinking that people are making these manually and I couldn’t find another service that automates it,” he says.

The developer began to work on the app over the summer and released the current version in late August. Much of that time was spent waiting on Spotify to offer an API key which allows the app to work, Bauman notes.

Upon first launch, you’ll have to authenticate with your Spotify credentials before getting started. You can then upload a music festival poster image to the app to get started building your first playlist. The app currently supports images with text in English, French, Italian, German, Spanish, Portuguese or Chinese, and all the image scanning is done locally on your own device.

In addition to Spotify’s API, LineupSupply uses Apple’s Vision Framework to extract the text from the music poster’s image, which is then matched to artists’ names and transformed into a music playlist. And while the app requires users to have a Spotify account, you won’t have to be a Spotify Premium subscriber to take advantage of its features.

The playlists the app creates can be hours long, given the size of the artist lineup for the event in question.

Unfortunately, we found the app struggled with atypical fonts and was not always able to identify all the artists on some posters. For example, when we tested the app with an image for this upcoming Hopscotch Music Festival featuring colorful, bubbly-lettered artist names in varying sizes, the app was only able to recognize a small handful of the artists on the poster. That could provide a start for creating a custom playlist, but we’d still have to fill out the rest of the playlist manually, as before. (Bauman says he’s working on this issue.)

But other events that use more standard fonts, like this image for EDC Orlando 2022, worked much better, we found.

LineupSupply also lets you customize the playlist before its creation by removing artists you don’t want included in your playlist. And if you don’t want to do the work of finding and uploading your own image, you may be able to find an existing playlist built by other users in the app’s “Discover” section.

There’s no limit to the number of playlists you can create with the free version. 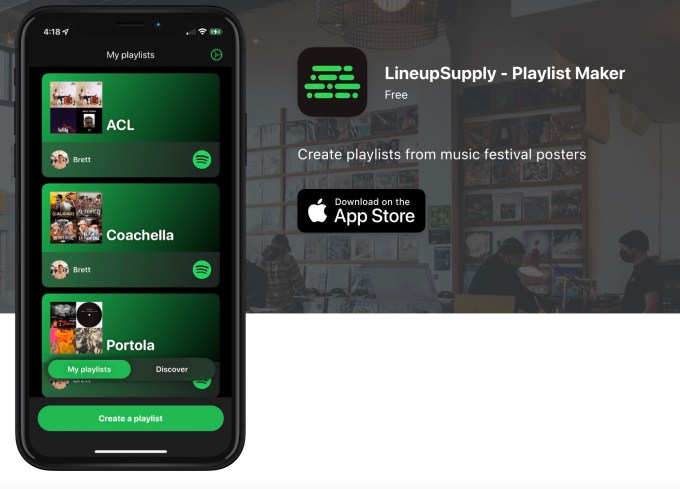 For a one-time upgrade of $1.99, you can gain access to a few additional features, including the ability to set a custom app icon or further customize the playlist by controlling the number of songs per artist, the song sorting options and the playlist description.

Paid users can also access personalized music recommendations based on the artists found in your uploaded images.

Bauman says he has some other ideas to continue to develop the app, including plans to support other platforms, like Apple Music. He’s thinking about other ways to automate playlist creation, as well.

“I’m really interested in exploring other mediums besides images to create playlists, like videos and text,” he told TechCrunch.

Users created 100 playlists with the app during the first two days of its release, and now, around a week later, that number has grown to around 250. Of course, this isn’t a proxy for user numbers, as some people may be using the app to access playlists created by others, instead of uploading their own images.

The app is a free download from the App Store.