Instagram, facing scrutiny from safety advocates, started testing a program in the U.S. earlier this year to verify users’ age of those claiming to be 18 or older. It uses techniques including authentication via running video selfies through an artificial intelligence system. The Meta-owned service is now ready to roll out this program to two key overseas markets: India and Brazil.

These countries together have about 400 million monthly active users on Instagram, according to market intelligence platform Sensor Tower, data of which an industry executive shared with TechCrunch. The social network said in an updated blog post that it plans to roll out this age verification program to the U.K. and EU before the end of the year.

Users can verify their age by providing an ID. Instagram has a list of documents it accepts for verification.

The program allows users to upload a video of themselves, which Instagram runs through an AI system to determine whether they are indeed aged 18 or older. For this option, Instagram has partnered with the U.K.-based identity startup Yoti. Once users complete taking a video selfie by following the on-screen instructions, Meta shares that with Yoti for verification through its specially trained AI. Both companies say they delete the data afterward.

Many social media companies use Yoti’s age estimation tech for verification as many users might not have a valid ID that is accepted by Instagram. 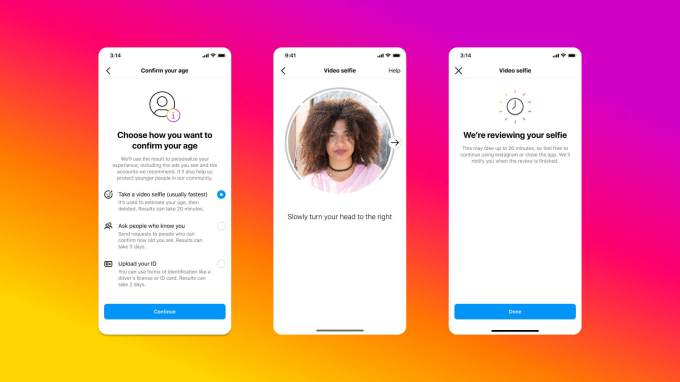 The social giant also said it is removing Social Vouching as an option to verify age. Social Vouching, one of the experimental ways Instagram verified the age as part of the new program, allowed a user to request their mutual followers, who are aged 18 or above, to vouch for the age. While it didn’t expand on the reason, it is likely that some users were gaming the system by asking their mutual followers aged 18 or above to lie for them.

The rollout comes at a time when safety advocates are lambasting Instagram for letting kids under 13 use the platform and not doing enough to stop teens from potentially seeing harmful content. On its part, last year Instagram made it mandatory for everyone to enter their birthdates, but it’s hard to rely only on that factor as users can easily provide false information. Notably, Twitter is rolling out a feature that asks users to enter their birthdates to see sensitive content.

Instagram says it uses age data to restrict certain experiences for teens: it makes accounts of users under 16 private by default, blocks DMs from unknown adults and stops advertisers to serve targeted ads based on teens’ interests and activities.

Lawmakers across the world are also looking at introducing rules that force platforms to have effective age checks in place. The U.K.’s Online Safety Bill and the California Age-Appropriate Design Code Act look to restrict content that users aged under 18 can access. Their scrutiny was partially prompted after a whistleblower testified last year to reveal that Facebook had prioritized profit over the well-being of users, especially teens.