A new startup wants to help online media outlets make money by making it easier for consumers to access paywalled content without being locked in to multiple subscriptions.

Demoing as part of the Battlefield 200 cohort at TC Disrupt this week, Zette is trying to achieve something that others before have tried. Since the dawn of time (well, at least since the advent of the web), digital media businesses have sought new ways to make money. While traditional newspapers and magazines’ path to monetization was relatively straightforward, insofar as they charged money for a physical product (usually filled with paid advertising), the online sphere has had to flirt with a multitude of models, from advertising and events, to — increasingly, it seems — paywalls.

But while paywalls promise clear and predictable income, it’s a difficult model to scale outside of the major outlets such as the New York Times. People don’t want (or can’t afford) dozens of subscriptions, but that doesn’t mean that they’re unwilling to pay something to access individual articles if they’re given the option to do so.

There are already subscription-based services such as Apple News+, which bundles stories from hundreds of publications, and pay-per-article alternatives such as Blendle, which allow publications to charge microtransactions to read one-off articles. Zette sits somewhere in the middle, charging a monthly $9.99 subscription for access to 30 articles from its partner publications, though it is also dabbling with different pricing plans for those who want to purchase more credits. However, if the user doesn’t consume their credits in a given month, this doesn’t roll over to the next month — everything resets.

The story so far

Zette was founded out of San Francisco in 2020 by former Forbes reporter Yehong Zhu, and after raising some $1.7 million in seed funding last year, the company is officially arriving in private beta this week for waitlist members, ahead of an anticipated public launch early next year. For now, Zette has inked deals with New Scientist, Forbes, McClatchy, Boone Newspapers, and Haaretz, with plans to bolster this by “hundreds” more in the coming year.

So, how does it all work? Well, the user downloads and installs a browser extension, signs up for a Zette account and subscription, and when Zette detects a paywall on a partner website, it invites the user to unlock the article by paying a single credit. 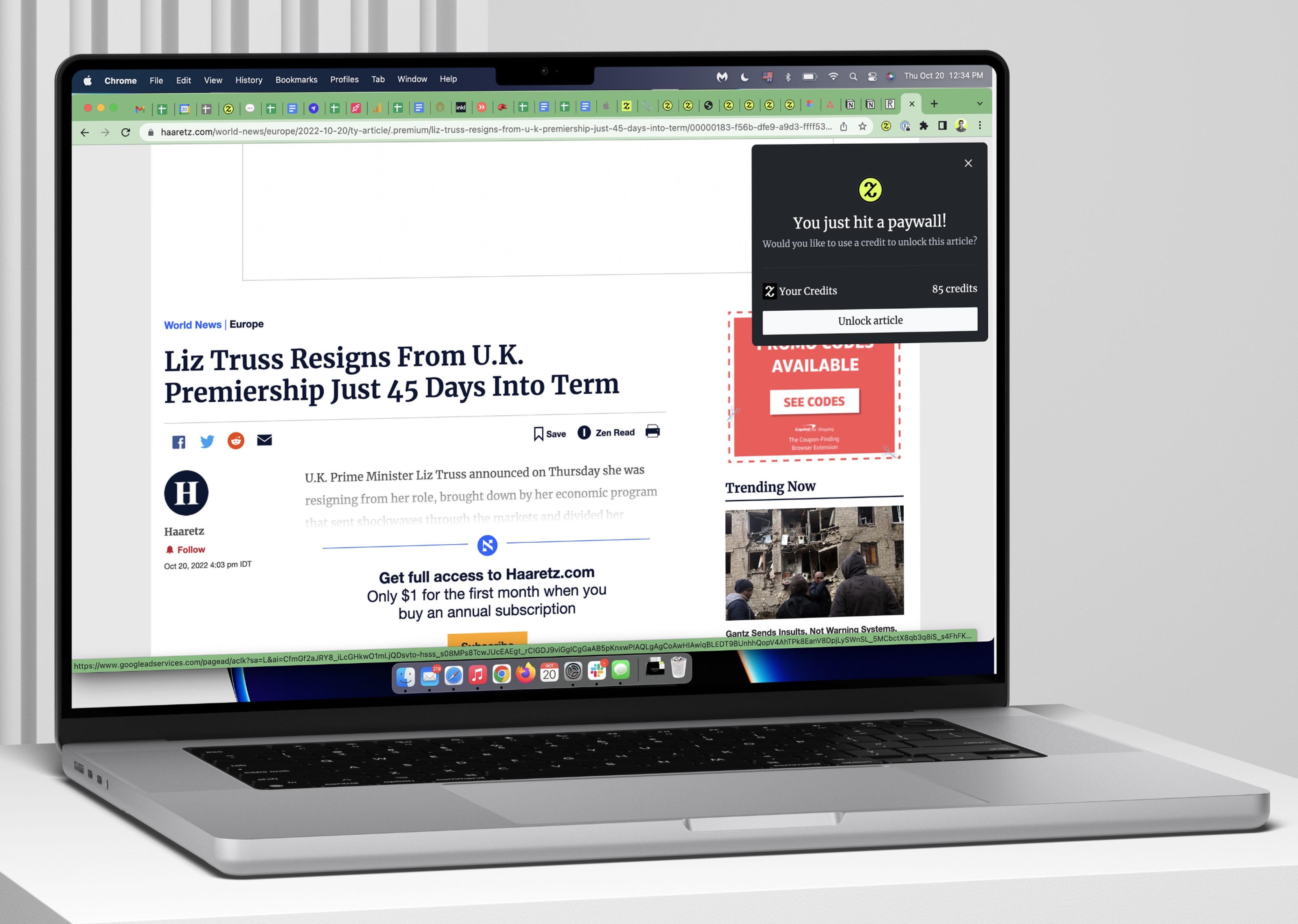 The company said that it’s also considering allowing users to roll over some of their credits, though with a time limit on when they need to be used by.

Perhaps the crucial point worth noting here is that in contrast to something like Apple News+, rather than serving as an aggregator, Zette’s pitch to publishers is that it enables them to retain relationships with their readers, given that their content remains on their own website.

“Publishers control the display and messaging of their content, unlike within Apple News’ ecosystem,” Zhu said. “Readers can open an article from anywhere — Twitter, Facebook, Google, iMessage, Slack, the news websites themselves — and still use Zette to unlock the article.”

Zette will be focusing on the U.S. market exclusively at first, but it has aspirations to launch in international markets too.

“We’re an American company focusing first on U.S. readers,” Zhu said. “We’re investing heavily in marketing and growth, especially as it pertains to getting younger readers — Gen Zs and millennials — on board.”

There are, perhaps, some flaws with this type of model. The benefit of subscribing to a publication directly is that while you might not enjoy everything in it, you will probably find some articles that you like. With a subscription-based, pay-per-article model, you don’t know whether you’re going to like it before committing credits to the cause. On top of that, you might not stumble upon 30 paywalled articles in a given month that you want to read. So for a $10 monthly payment, it’s possible that some subscribers simply won’t get value from it.

There are some elements of Blendle’s model that make more sense. There is less pressure on the reader to consume a set number of monthly articles, as it’s built around single microtransactions — put money in your account, and use it whenever you want. But while that may be a more consumer-friendly model, it doesn’t necessarily benefit the publication or the company behind the technology. According to Zhu, this type of business model merely encourages “sporadic use rather than sustained readership,” ultimately leading to higher churn and poor monetization.

“We also believe that consumers tend to not enjoy the experience of having to put a dollar and cents value on each article they want to read,” Zhu continued. “This causes them to feel ‘nickel and dimed.’ For this reason, Zette took inspiration from video games, where you buy bundles of ‘virtual coins’ up front for in-app purchases: we replace money with credits to distance the customer from the feeling of making a purchase. This makes each transaction low-friction, and also makes it easier to top up on credits every month. We believe that a microtransactions-like experience on the frontend, recurring revenue on the backend, is the best of both worlds.”

Moreover, while there are benefits to a traditional news subscription — such as readers being able to consume everything from sports and politics in a single publication — not everyone wants to read a newspaper cover to cover.

“Traditional news subscriptions serve one audience very well: heavy readers,” Zhu said. “These are readers who hit paywalls often enough and frequently enough that they decide to become paying patrons of a single outlet. The majority of online readers are light readers: they browse around for news, they only want to read one article at a time so they can’t justify the cost and inconvenience of signing up for a subscription, they’re relatively brand agnostic, they’re price sensitive, and they are largely looking for a diversity of content, rather than just getting all their news from one publication.”

In addition to the browser extension, Zette is also working on a mobile app, which should be ready by the time Zette opens to the public in early 2023.

For now, though, Zette said it has started opening access to a small percentage of users from its waitlist who will have free access for the rest of this year, though in return they will be tasked with providing feedback to the company on ways to improve the product.