As hiring remains challenging in an economy where jobs are plentiful (depending on the sector), venture capitalists continue to pump money into HR startups focused on assessing and onboarding candidates. According to PitchBook, companies focused on tackling hurdles in payroll and people management and recruitment raised $12 billion last year. For example, Velocity Global, which offers a platform that handles onboarding and payroll, raised $400 million in a single funding round last year, while employee management software vendor Rippling landed $250 million.

In a sign that the enthusiasm isn’t dying down, Ashby, a new recruitment platform launching out of stealth, has raised $21.5 million in equity financing. F-Prime Capital led the Series B with participation from Elad Gil, Lachy Groom, Semper Virens, Base Case Capital and Gaingels, bringing Ashby’s total raised to $34.5 million.

Ashby was founded in 2018 by Benjamin Encz and Abhik Pramanik, who met while working together at PlanGrid, a construction productivity software startup. Prior to PlanGrid, Pramanik was an R&D engineer at Industrial Light & Magic and co-launched Choir, a mobile app designed to provide therapies to those with mental health challenges. He was also a project lead at German IT service provider Datagroup before building clinical software and processes for the Mayo Clinic.

At PlanGrid, where Encz was the director of engineering and spent the bulk of his time on recruitment and recruitment-related tasks, Encz says he ran into limitations with existing applicant tracking systems (ATS) — and was inspired to build one from scratch. It isn’t just him. According to one survey, 50% of employers don’t use ATS software, whether because of blockers with implementation or insufficient C-suite buy-in.

“Recruitment teams are being disproportionately impacted by current tech layoffs — this creates the need to run leaner budgets and do more with less headcount,” Encz told TechCrunch in an email interview. “Ashby is consolidating recruitment tools for companies with double-digit employee counts. [The platform’s] automation of tasks like sourcing and scheduling are big advantages for lean recruiting teams.” 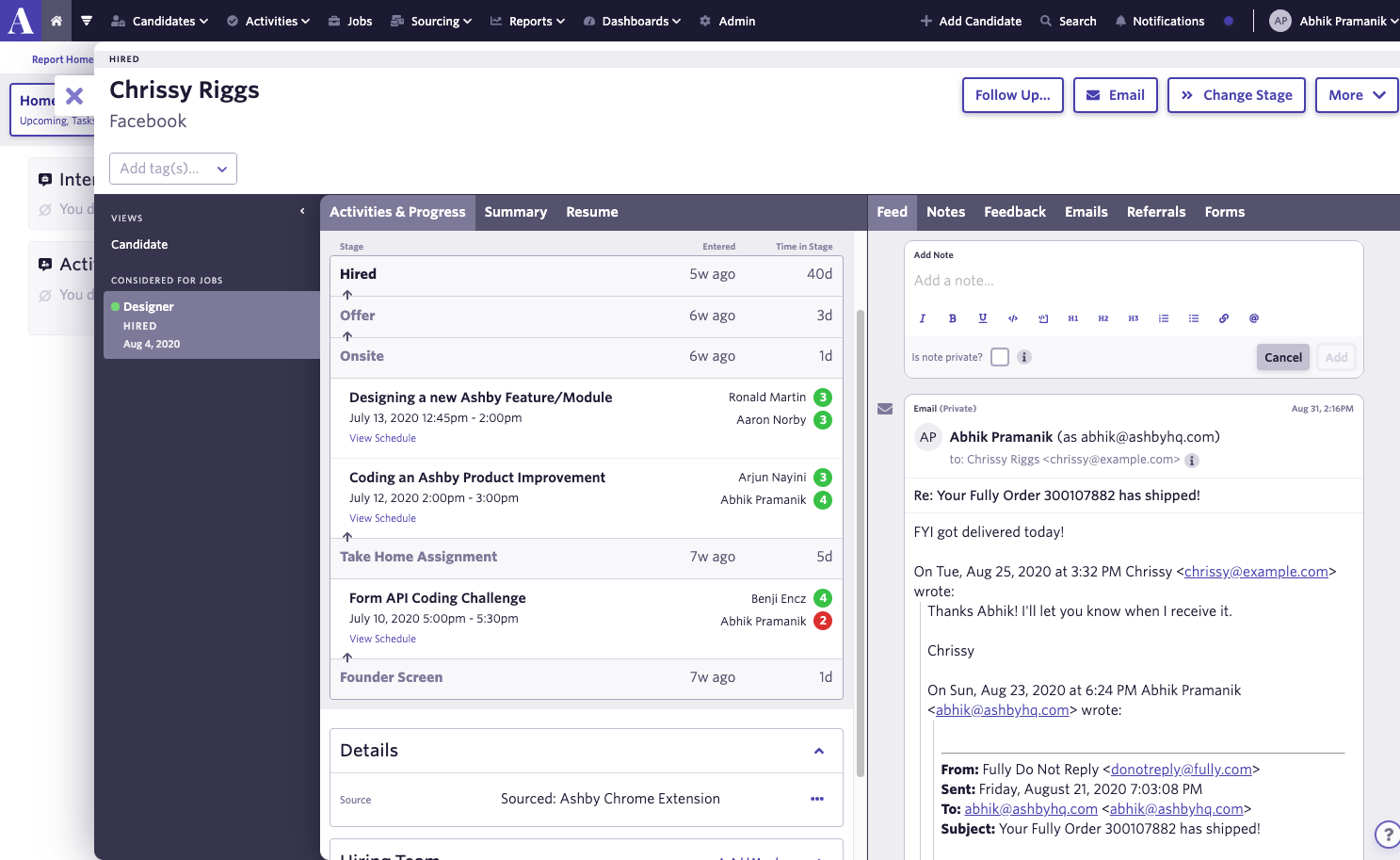 Encz sees Ashby replacing solutions from vendors like Greenhouse and Lever with algorithms — specifically scheduling and profiling algorithms. He claims that the platform uses AI to automatically find times that work for interviewers and interviewees and infer demographic data like gender and ethnicity, which clients use for aggregate analyses of diversity, equity and inclusion (DEI) hiring metrics.

Encz was quick to assert that the demographic data can only be used in the aggregate and not in a way that impacts individual hiring decisions.

“The average recruiting team of a company with more than 100 employees has three to five tools, which is expensive, compromises data quality and slows down the process,” Encz said. “Existing recruiting data and analytics are limited and unreliable, making it difficult for finance to do … planning. Hiring managers can’t keep track of candidate pipeline or track DEI statistics. Ashby’s platform is particularly strong in data collection, data quality, multi-departmental workflows and reporting — we have templates and custom options.”

The market for recruitment software could reach reach $3.85 billion by 2028. A number of startups are competing for a slice of it, unsurprisingly, like Guide and Fletcher. Elsewhere, recruitment platform Gem gained unicorn status last September.

But Encz says that Ashby already has a number of high-profile customers, including Notion, Opendoor, FullStory and Figma, and a client base exceeding 500 brands. He declined to share revenue metrics while averring that the company is prepared for a potential slowdown, noting that Ashby intends to increase headcount from 55 employees to 75 by the end of the year.

As alluded to earlier, one factor in Ashby’s favor is enduring demand for HR tech broadly speaking. The market has proven remarkably resilient in the face of both pandemic and economic headwinds, as companies invest in digital infrastructure and macroeconomic fears increase the pressure on HR teams — some of which had to contend with layoffs among their ranks — to vet candidates carefully.

“Last year was a huge accelerant — this year less so,” Encz said. “We anticipate a potential slowdown but we are well-capitalized. The Series B was opportunistically based on strong growth and wanting to have a healthy cash reserve. In the next 12 months, will use the new injection of funding to expand Ashby’s offering further beyond what is typically found in ATS, allowing us to be more aggressive on product, design and engineering hiring.”