A popular mobile app is bringing access to Reddit to the iPhone Lock Screen with iOS 16. The new version of the Apollo for Reddit iOS app has embraced the iOS 16 feature that allows third-party developers to build custom widgets that can appear on the phone’s Lock Screen, offering at-a-glance information or even a way to tap directly into a favorite app. We’ve already seen a number of new apps take advantage of this functionality. However, Apollo’s iOS 16 update is one of the more comprehensive yet, offering not just one or two new widgets — but a whole lineup designed to appeal to the heaviest Reddit users.

The updated app (version 1.14 on the App Store) introduces a range of widgets for the iOS 16 Lock Screen that can be used either independently or together, allowing Reddit users to keep an eye on the site as well as their own Reddit activity.

One of the new options is a Trending Post widget that lets you pin a particular subreddit to the Lock Screen where it will cycle through the various trending posts throughout the day. Or you can simply pin a favorite subreddit to use as a shortcut that will launch you directly to its page when tapped. (Possibly a better option for a subreddit whose posts might be too embarrassing to actually highlight on your Lock Screen!)

An interesting — and humorous — addition to Apollo’s Lock Screen widget lineup is its new Scroll Distance stats widget. Aimed at the most addicted Reddit users, this widget will track how far you’ve scrolled in the app in the distance measurement of your choice. Scroll distance in feet? Miles? Kilometers? This is a crazy way to see your Reddit obsession quantified.

The new widgets aren’t the only iOS 16 features the app has in store.

It’s also introducing a Live Text feature that allows you to select any text on images posted to Reddit and interact with it. This technology had previously been available in iOS 15, but only in Apple’s Photos app, Apollo’s developer Christian Selig notes. But with iOS 16, third-party developers can now access those same APIs, he explained.

The feature could be useful for things like copying a recipe’s text or translating a meme into another language, the app’s update description on the App Store suggests.

In addition, Apollo will now display a city’s weather and current time when you navigate to a subreddit for that locale, like r/London, for example. This feature is powered by Apple’s new WeatherKit framework, which publicly launched this week along with iOS 16.

The app has another easter egg, too. Though developers are intrigued by the new “Dynamic Island” user interface update that turns the pill-shaped notch at the top of the iPhone 14 Pro into a tappable and interactive feature for notifications, API access to build for this area is not yet public. (The feature is expected to launch in an update to iOS 16).

In the meantime, Selig decided to add what he calls “Pixel Pals” to the Apollo app (update 9/16/22: now available). — a sort of Tamagotchi-styled friend that lives on the top of the area that will become the Dynamic Island. A few different animals are available, as well, to move and climb around atop this currently unused space. 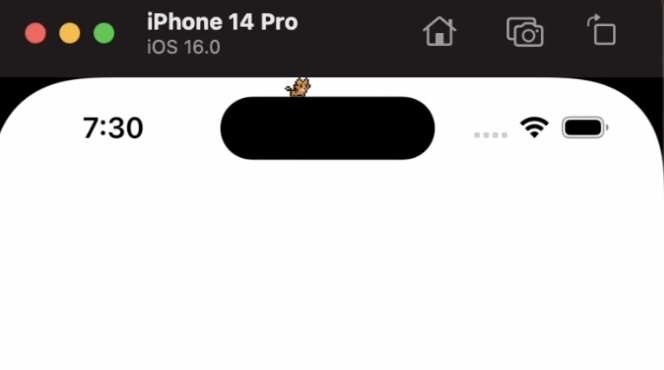 The updated Apollo app also includes new app icons and a long list of other smaller bug fixes and improvements, based on user feedback, though the Lock Screen widgets are the flagship feature in this release that make it worth the download.

Okay y’all, I think I found the best idea for the Dynamic Island on the iPhone 14 Pro. I added a cat that lives up there like a tamagotchi and just hangs out and does cute stuff as you browse Reddit in my app (Apollo). pic.twitter.com/xJJlazHH4E