Villages are usually quiet, small places where the atmosphere is rich with history. Sometimes, however, history comes back to haunt the inhabitants . . .  On this list are some of the most haunted villages from around the world.

Ask about haunted villages in the UK, and most people will immediately say “Pluckley!” But about 90 minutes from Pluckley lies the village of Bramshott, in Hampshire. Bramshott has been around since before 1086. By the 1700s, the village had an inn called Seven Thorns, where many crimes—including murder—took place.

Around the time that all these violent crimes were happening, paranormal sightings began and still continue to this day. Bramshott is believed to have up to 17 ghosts haunting it, including Mistress Butler, who dwells alongside the river where she drowned herself in 1745, and the Flute Boy, who roams the lanes of the village and sometimes even climbs the trees. He plays beautiful music and often appears close to the apparition of a white calf. Other ghosts include the White Lady, the Grey Lady, and a young boy murdered by highwaymen in 1772.

Kuldhara in India used to be inhabited by the Paliwal Brahmins until all of them abandoned the village overnight in 1825. The story goes that a diwan fell in love with the daughter of the village chieftain and threatened the Paliwal Brahmins with exorbitant taxes if they did not hand the girl over to him. Hence, they disappeared overnight and left a curse in their wake: Anyone who attempted to make the village their home would lose their lives.

Kuldhara remains abandoned except for tourists and paranormal investigators passing through its streets. Investigators have reported seeing unexplained apparitions as well as being touched on the shoulder by an unseen presence during their visits there. Perhaps most chilling is the discovery of handprints on their vehicles after they completed their investigation.

The village of Borgvattnet in Northern Sweden is known for having one of the most haunted houses in the country. The Old Vicarage was constructed in 1876, and reports of ghosts first came in 1927, when Chaplain Nils Hedlund reported his clothes being pulled down from the washing line by an unseen hand.

In the 1930s, a priest witnessed an old woman appear in a room, and she disappeared in front of him when he tried to follow her. In 1945, Chaplain Erick Lindgren reported a disturbing phenomenon: He was thrown out of his chair on multiple occasions by an unseen entity.

Today, the Old Vicarage is a restaurant and guesthouse, and the reports of paranormal activity continue.

In February 2016, Tropical Cyclone Winston struck the village of Nayavutoka, Ra Province, Fiji. Tidal waves caused by the cyclone resulted in many destroyed homes and the loss of two lives. One of the victims was a 32-year-old disabled man named Pauliasi Naiova. He was buried the next day, after his body was found among the debris left by the storm.

Osea Balesavu, who took care of Pauliasi, awoke a few nights after the funeral because of incessant barking by the village dogs. Pauliasi was standing in front of him, muttering “kakana,” which means “food.” Balesavu also claimed that the dogs barked again the next night right by the mattress where Pauliasi used to sleep on. After a week of more of the same, a group of young men ran out of a house they were camping in, terrified. They told the village headman that they had seen Pauliasi limping around the place asking for kakana.

Beenleigh Historical Village is located in Logan and is comprised of 20 heritage buildings containing original historical items used by those who lived there from the 1860s onward. Paranormal investigators took a series of photographs after a number of reports were made by visitors and employees regarding ghostly activities in the village. These photos show a blurry, dark shadow in the gardens, the face of what looks like an old man in one of the windows, and a female in a long dress in one of the halls.

Photography experts are not convinced of the authenticity of the photos. However, the CEO of the historical village confirms that suspicious activity has been occurring for a long time, including unexplained shadows and even a piano playing by itself.

The little village called Prince Albert, located in the Karoo in South Africa, dates back to 1762. Quite a few ghosts have accumulated here, but strangely enough, they all seem friendly.

The village offers a guided ghost walk that introduces tourists to the ghost of a young bride who lost her life the evening before her wedding day. She now haunts the local museum but is said to be in good spirits despite her tragic fate. Then there is a young girl in night clothes who jumps up and down on a bed in Mearns House, where a war doctor by the name of Dr. Mearns used to live. There is also an old man who haunts the stoep of a local home and waves at ladies who pass by.

Although only ruins remain of the village of Lawers in Scotland, the site has been put up for sale. However, the offer comes with a warning: The village has allegedly been cursed by the Lady of Lawers.

The Lady, who was a soothsayer from the 17th century, reportedly cursed an ash tree. She was also buried next to the tree after her death. A farmer by the name of John Campbell cut down the cursed tree in 1895 and was gored by his own bull soon afterward. He died from his injuries, and a neighbor who tried to help him later went insane and was taken to a mental institution. A horse that was used to drag the tree away also died without apparent cause.

Sightings of a female ghost continue at the site, and a lot of visitors are convinced it is the Lady herself haunting the ruins. 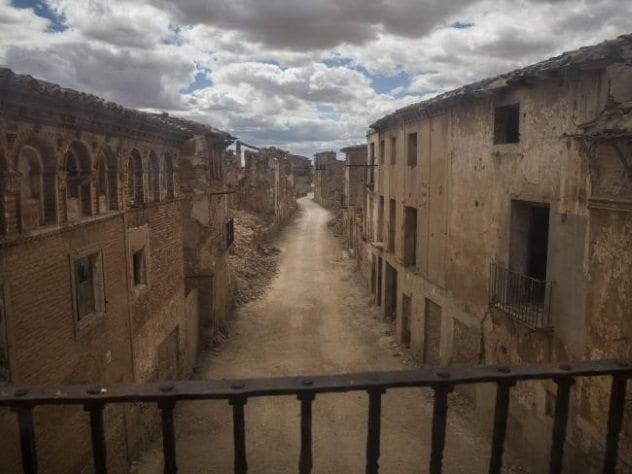 Over roughly two weeks in 1937, thousands of people, including women and children, were killed in the village of Belchite during the Spanish Civil War. The water supply to the town was shut off, and thousands starved to death or were hit by shells fired from the surrounding hills. Bodies were burned in the town square, and others were sealed up in an underground olive oil press.

Today, the plaintive cry of a child sometimes sounds off at dusk, wailing along the deserted streets of Belchite. The child cries and calls to his mother; both child and mother were lost during the war. Farmers in the area hear other unexplained sounds and voices echoing from the village at night. The place has now been secured as a movie set, with filming taking place in spite of the hauntings.

In the small village of Voltri in Liguria stands an ominous-looking house next to a winding road. The house, Ca’delle Anime, was once an inn owned by a family that suffered from mental problems. The family would drop heavy pieces of furniture on their sleeping patrons, who died terrible deaths being crushed and suffocated. They would then steal the dead guests’ money and other belongings before adding their bodies to a mass grave they had constructed.

It is said that the spirits of the victims are restless because they cannot leave the house they were murdered in. They wander the halls and rooms of the terrifying house, moving furniture and dropping crockery to make their presence known.

On June 10, 1944, the Germans invaded the village of Oradour-sur-Glane in France. They proceeded to separate the men from the women and children, after which they shot most of the men in the legs and then lit them on fire. Only five men managed to escape the massacre. When a gas bomb failed to detonate, the soldiers shot the women and children with machine guns and grenades. Some of them were also burned to death. Afterward, they burned nearly all the houses in the village to the ground.

A new village by the same name was established near the destroyed one in 1958. However, residents refuse to set their feet near the ruins of the old village. They claim to see the spirits of the dead men, women, and children roaming the ruins at night and also smell the stench of burning flesh and wood coming from the old village.

Estelle lives in Gauteng, South Africa. She loves creepy stories of all kinds.