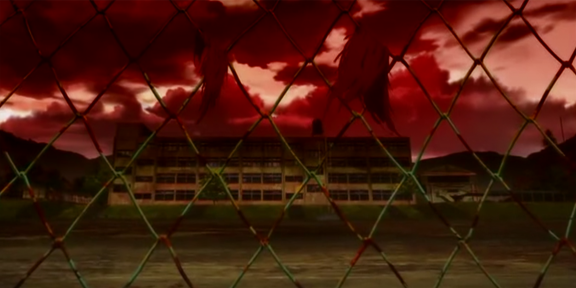 This story took place when I was still an elementary school kid.

Our town had a 2-storied tall abandoned building which was in a pretty rundown condition. The window panes were shattered, walls had cracks—the entire building looked as if it was about to collapse. Due to this, the locals feared going near it.

One certain day, I, together with my friends, decided to go inside it as a test of courage*.
It was still afternoon time, so we decided to go up to the 2nd floor and investigate it.
On the 2nd floor we came across a door that had something written on it.

We entered the room and progressed inside it. At the end of the room, the path divided into two: left and right. There was something written on the wall.

So, we continued on the left path. Of course, we were already scared by this point, but we needed to know the person behind this. At the end of the path, we came across two rooms: one was on left, other was on right.

“My head in the left room. My body is in the right room.” the wall read.

As soon as my friends read the inscription, they frantically ran away out of the building.
But I didn’t want to give up after making this far. I mustered courage and entered the right room.

The wall at the end of the room read “My body is beneath this.”

“My head has come for you from the left room. Don’t look back.”

Without wasting any second, I jumped out of the window.

Since then, I haven’t been in vicinity of that building.