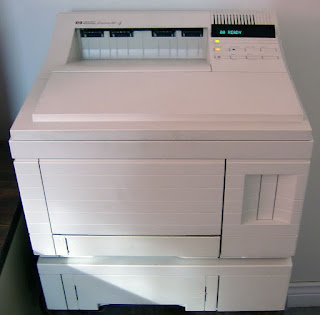 Never in my life I’d buy an used printer again.

I was still an university student during those days. Just like normal students, we were required to prepare reports on a frequent basis; therefore, I decided to buy a second hand printer off the market.

It was the weekend so I and my friend decided to wander around Akihabara in search of something interesting. Eventually, we reached a shop that had all kinds of used electronic products. In the midst of other items, I found a wonderful black and white laser printer.

It looked comparatively new with some warranty period still left. I was lucky.

We returned to the apartment quickly, installed the drivers, and decided to do some test prints.
I went to toilet after clicking on the print button. My friend switched on TV and started watching some random show.

A few moments later, my friend noticed an unusual phenomenon. Even though it was a test print, the printing process did not stop after printing one page. Rather, it used up all the pages and stopped only after that.
He looked at the printing program but couldn’t find any error that might have caused this.

He looked at the printed pages
“Huh?”

There was a woman’s face printed on all the pages. Most of the features of her face were all blurred out but it could be seen that she had black colored eyes, hair and mouth.
Her face was printed such that she was glaring in our direction.

Moreover, her face had a slight difference in every picture.

To be sure, this time we printed a text file.
No mistaking it. The printer printed something on its own.

That was it. My friend decided to return it and went to the shop. Unfortunately, the shop had already closed so he returned back.

I didn’t want to spend the whole night with the printer in my room, so I asked my friend to help me carry it to the University club room. Initially he wasn’t willing to but agreed when I offered him a free treat on the way.

The next day we went to the university to retrieve the printer. There was a junior outside the club room and he was looking at me without a troubled face.

“Sir, did you stay in this room yesterday night?” he asked.

According to him, the student council put a notice on the door which read “Please don’t stay in this room”

For the time being I asked him to to inquire about that from other students.
I carried the printer back to the shop.

The salesperson checked it but found nothing out of the order, so he refused to take it back.

For some reason, I then asked him to buy it back from me. He agreed for 3000 Yen.

I returned to the university and continued my talk with the junior.
We talked whether somebody really stayed in that room last night.

The junior went to the student council for confirmation. Another person, who was in charge, told me this:

“Last night when the Janitor was patrolling the area, he heard a woman’s scream coming from that room. He tried approaching the room but the lights went out and the door got automatically locked. He knocked on the door continuously but it didn’t open. “

The junior returned and told that he asked every club member about it. Also, it doesn’t look like some outsider stayed in that room.

When the student council got fully convinced that it was not some intruder, they changed the lock of that room.